The Last Refugees: Bhutanese in Nepal

Bhutanese refugees in Nepal never got much international attention and now, after more than 20 years...

Each year, our journalists tackle some of the most pressing yet underreported issues in the world with intelligence, grace and deep sensitivity. 2014 was no different.

Our journalists worked on close to 100 projects with over 370 story placements in nearly 130 media outlets. They worked in over 60 countries, covering topics ranging from drone use to maternal health to LGBT rights. We are so proud of the work our journalists do each year, and we want to close out another successful year by sharing some of our favorite photos shot by our journalists in 2014.

Each member of our staff has chosen a favorite image from this year and has written a short explanation about the appeal of that particular image. Scroll down to see all the selections. If you get through the post and see that we didn't include your favorite photo, tell us! We want to hear from you. Comment under the post and tell us about your favorite Pulitzer Center photos.

Image by Alex MacLean. Canada, 2014.
Jon Sawyer, Executive Director: "Aerial photographer Alex MacLean captures the gigantic scale and other-worldly feel of the tar sands project that is remaking the landscape of northern Alberta. In this image the thick black strip of uncovered petroleum coke has the jarring feel of something unnatural and big, an unsettling impression that is only reinforced by the over-sized trucks in the foreground and the mountain landscape beyond."

Image by Sami Siva. India, 2014.
Nathalie Applewhite, Managing Director:"India's transgendered women live on the fringes of society, struggling to find legitimate employment and battling an epidemic of HIV/AIDS, despite a documented history dating back to the Kama Sutra. But in this image Sami Siva captured Chaya Sing, the winner of a beauty pageant contest for transgender women organized during the largest gathering of transgender women in India, in a playful, coy pose. She looks strong, seductive and her sweet smile is endearing. At the same time her eyes look away from the camera, as if she may be hiding something, while the woman behind her stands somewhat uncomfortably, looking straight at the camera, but out of focus and on the "fringe" of the frame. The light is soft and warm, as on a movie set, but the backdrop conveys an emptiness. To me, the composition, spirit and light of the image evoke the tensions these women face in a subtle but telling way."

Image by Yana Paskova. Bulgaria, 2014.
Tom Hundley, Senior Editor: "The end of communism in Eastern Europe did not mean a happily-ever-after transition to the marvels of the free market. East Germany, the Czech Republic and most of Poland are generally regarded as the lucky ones. On the other side of the ledger there is Bulgaria. Twenty-five years after the Fall of the Wall, Yana Paskova captures the grim reality of her former homeland, where everything has changed—yet somehow remains the same. In a photo essay for The Washington Post, Yana visits the derelict factories and abandoned villages scattered across Bulgarian landscape—and also the people who inhabit this bleak landscape. The power of Yana's work unfurls image by image. The effect is cumulative—a sense of weary desperation, hopelessness, and the startling beauty of ugliness. It is hard to choose just one image, but this one—the absurdly cheerful color of the ruined building, the overgrown foliage, and a woman with a dog who has spotted something in the brush—speaks eloquently of the anonymous individual trapped in a post-communist time warp."

Image by Julia Rendleman. Nepal, 2014.
Ann Peters, Director of Development and Outreach: "The hands drew me to this photo... and the rain. Sometimes when we go on a journey, we'll look at those we're leaving behind, wave, blow them kisses; other times we just look forward and avert the eyes of our loved ones. Either way, it can be painful, scary, maybe even a bit joyous. The bus, the waves, the rainy day: not knowing what the future will bring and hopeful all the same."

Image by David Rochkind. Vietnam, 2014.
Marvin Kalb, Senior Advisor:"I chose this photo because it shows the loneliness of the victim, the helplessness. The shafts of light suggest hope, but probably in his mind they may just set borders on his empty life. Did someone once say, a picture is worth a thousand words? Sometimes it is."

Image by Sebastian Meyer. Iraq, 2014.
Steve Sapienza, Senior Producer: "I chose this hopeful photo by Sebastian Meyer that captures Kurds celebrating Newroz, the first day of the Kurdish calendar. The fiery warm color and the determined forward movement of the young men in the photo evoke both strength and optimism for a generation that has grown up with conflict."

Image by Sascha Garrey. Uganda, 2014.
Kem Sawyer, Contributing Editor: "I love the look of determination on this woman's face, the diagonal cut of the neckline of her dress, the colors, the geometric pattern of the cloth, the richness and earthiness of the terracotta backdrop. Then there's the composition—the woman's arm resting on her knee, the hair wrap, the broad forehead, the piercing look and (ever so slightly) bloodshot eyes. And I like the story behind the picture. Sascha Garrey, our 2014 Boston University School of Public Health student fellow, took this photograph of "Mama Amina," a small-scale farmer angry with her niece for refusing the HPV vaccine when it was offered at her school. In Uganda, every year more than 2400 women are dying from cervical cancer. But new methods of inexpensive detection and the use of the HPV vaccine are helping to bring those numbers down."

Image by Boryana Katsarova. Crimea, 2014.
Mark Schulte, Education Director: "Boryana found a stark and sinister anonymity in this image of Russian servicemen guarding a convoy after the February occupation of Crimea. It's a tense, uneasy, unwelcoming scene, full of foreboding."

Image by Misha Friedman. Crimea, 2014.
Lauren Shepherd, Outreach Coordinator: "Misha Friedman's monotone photographs of this couple and their son tell an intimate story of a family fleeing discrimination in the wake of Crimea's annexation by Russia. Safely in their new apartment in Ukraine, Bogdan and Yegor look to one another with a wordless understanding—relieved, yet unsure of how to rebuild their lives. Their son peeks from behind the suitcase, an image emblematic of cautious hope, following a hesitant and anxious journey across the border." 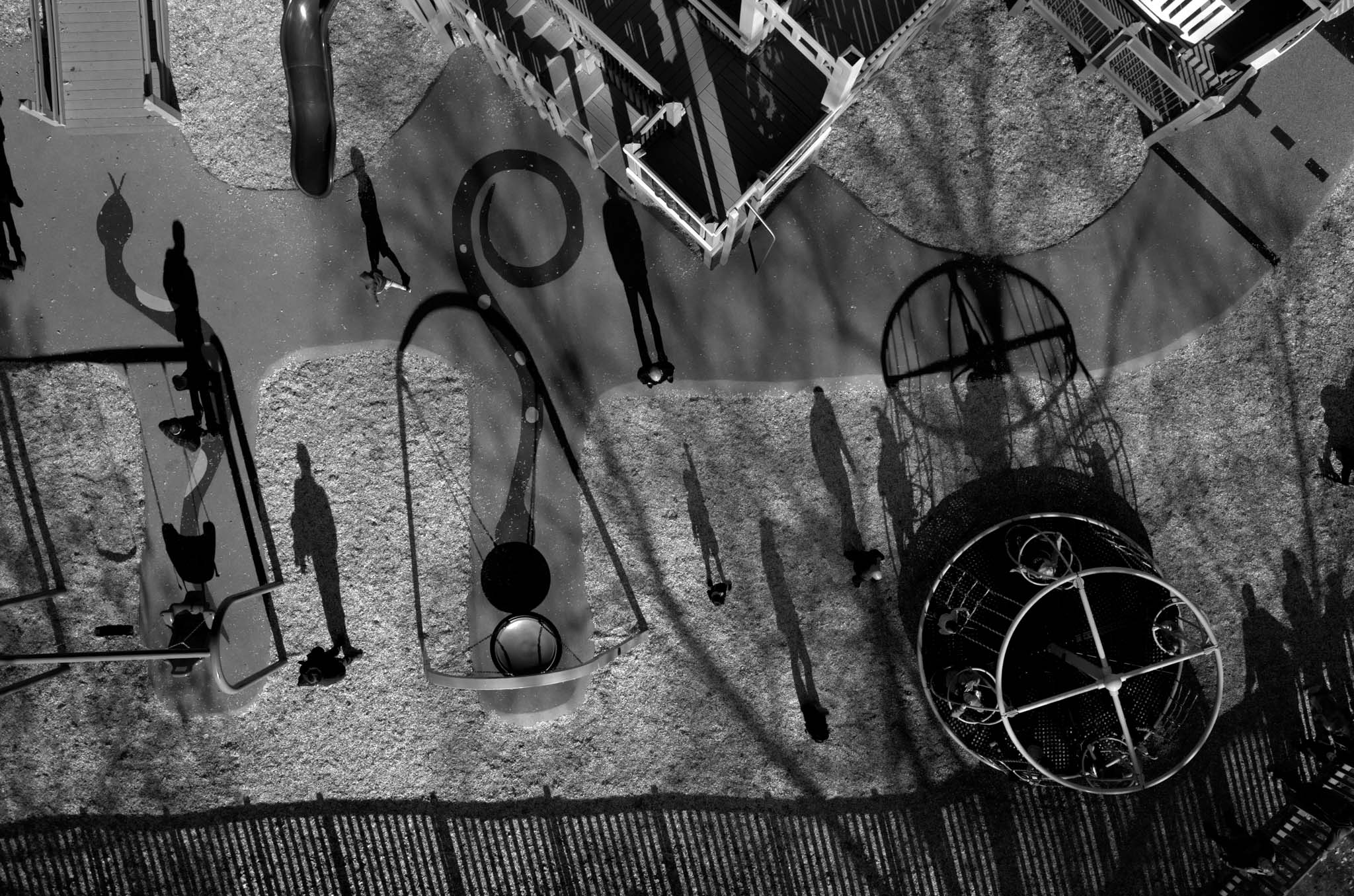 Image by Tomas van Houtryve. United States, 2014.
Amanda Ottaway, Education Coordinator: "The aerial photography in Tomas's project "Blue Sky Days" brings an experience that can seem distant and clinical—U.S. drone strikes abroad—jarringly close to home, like to this playground in Sacramento County, California. (The London-based Bureau of Investigative Journalism estimates that over 200 children were killed in drone strikes in Pakistan, Yemen and Somalia between 2004 and 2013.) The image makes me dizzy, as if I'm spinning in a child's funhouse nightmare, in a disorienting and distinctly sinister contortion of reality. But what I find most unsettling is the apparent shadow of a child in the middle, raising her hand high as if she's saying, 'Pick me! Pick me!'" This image appeared in a photo essay for the August 2014 issue of the National Geographic.

Image by Matthew Niederhauser. Brazil, 2014.
Jin Ding, Special Projects Coordinator: "While the world focuses on the World Cup and the upcoming Olympics in Brazil, this photo explains the lives of everyday people in that developing country. The child walking along this alley, under the national flag, represents the future of Brazil. It also makes me wonder whether mega-sport events change the quality of living in Brazil, and what legacy those international events leave on the people in hosting countries."

Image by Daniella Zalcman. Uganda, 2014.
Quinn Libson, Field Notes Podcast Producer: "I love this photograph because it communicates so much about John, about his life, and about the society he lives in. The double exposure immediately makes me think about the double lives that members of the LGBT community in Uganda were forced to live due to the country's official homophobia. People had to compartmentalize who they were, to reveal parts of themselves to some people, and keep the rest hidden. This portrait also forces me to confront how intimate this legislation was. For "kuchus" living in Uganda, love, sex, and even intimacy itself, were illegal. But, despite all of this, John seems hopeful, proving that even under intense adversity, life and love go on."

Image by Paul Nevin. Kenya, 2014.
Emily Baumgaertner, Intern: "I love this image of a Kenyan mother and her tenth child—born a year after she lost her ninth to common childbirth complications—in their drought-prone, goat-herding community of Gafarsa. The two hold their heads in very suggestive postures: the child's rolled back, almost lifelessly dependent, and the mother's subtly cocked, letting the light meet the lines of her face and the tilt of her chin. In contrast to most "poor kids in Africa" depictions, Paul has made a resilient mother the subject of the image—and the discussion. He has used small details such as matching jewelry—the child's resembling a hospital anklet—to capture the intimacy of a relationship in which, too often, only one will survive."

Image by Jason Larkin. South Africa, 2014.
Meghan Dhaliwal, Multimedia Projects Coordinator:"I love all of Jason's photos from this project, but there is something about the color and the attitude of the man in this photo that just grabs me. It is the day of South Africa's national elections, and this gentleman, a volunteer for the Economic Freedom Fighters (EFF), is head-to-toe representing his party. The story Jason did is about the way South Africa's government and mining companies have egregiously ignored or taken advantage of the lives of their workforce, but more than that this a story about people who are fighting for change. In the wake of the brutal Marikana shootings, the EFF was formed, strikes earned miners higher wages, and people continue to push for an investment in the lives of those working in the mines. Change comes slowly, but people like the man in this image are a part of it."

Tell us about your favorite Pulitzer Center photo below.

A drone's-eye view of America reveals the changing nature of war, privacy, and government...

Alberta’s oil sands region is at the heart of the KeystoneXL pipeline controversy. A project built...

The Real World Cup looks at the largesse of the soccer extravaganza in Brazil by examining its...

From "the Other Iraq" to Kurdistan

Today Iraq is consumed by sectarian fighting, but in the north the legacy of the US-led war is...

In the U.S., the HPV vaccine and regular pap smears have almost stopped the pervasiveness of...

India's transgender women have a documented history dating back to the Kama Sutra, but live on the...

A look at the intended—and unintended effects—of democracy on Bulgaria, a nation still undergoing...

Kenya continues to lose 7,000 mothers to preventable deaths each year. If the solutions are known...

Edging to the brink of civil war, Crimea has turned into a geopolitical crisis, perhaps the gravest...

The Price of Health: TB Budget Gaps in Vietnam

Vietnam has less than 30 percent of the funding needed to fight tuberculosis. With only the most...

Tremors Below: Mining and Protest in the New South Africa

In South Africa's poorest mining communities, fury at the political class is mounting.

Russia's military annexation of the Crimean Peninsula from Ukraine has already upended many lives...