The Pulitzer Center has had an exceptional year. With 85 projects funded and over 250 external placements, we've had a significant expansion from 2011. Our grantees traveled the globe, covering wars and famines, exposing human rights abuses, and generally shedding light on important but under-reported crises. (Scroll down to see our year in photos.)

We're proud to have worked with many talented photojournalists this year, each of them producing bold and unique bodies of work. We loved seeing them experiment with the medium of photography--shooting on black and white film, on their iPhones, on medium format cameras, or even venturing underwater (sorry about your camera, Dom).

We want to end a wonderful year by sharing some of our favorite photos shot by our journalists. Each member of our staff has chosen his or her favorite image from this year (for some of us it was hard to choose just one!) and has written a short explanation about the appeal of that particular image. You can scroll down to see all the selections. If you get through the post and see that we didn't include your favorite photo, tell us! We want to hear from you. Comment under the post and tell us about your favorite Pulitzer Center photos. 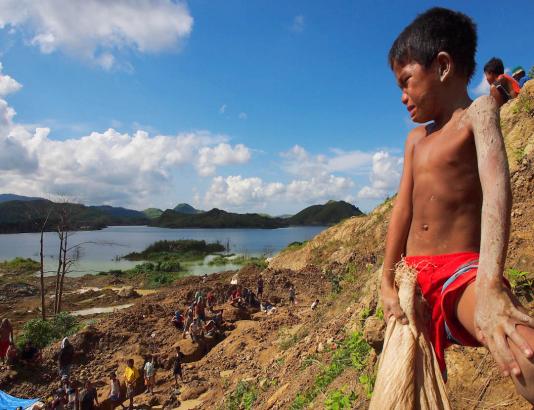 Image by Larry Price. Philippines, 2012.
Jon Sawyer, Executive Director: "Larry Price's photo of the crying child looking out over the mining pits at Panique in Philippines, and in the distance an apparently pristine lake that is in fact contaminated by cyanide and mercury runoff from the artisanal mining operations. The only sign that all not as it seems is the boy's anguished face. His downward gaze draws you into the people crawling around the mine below; beautifully composed. (I have another dozen photos that I liked nearly as much. What great work!)" 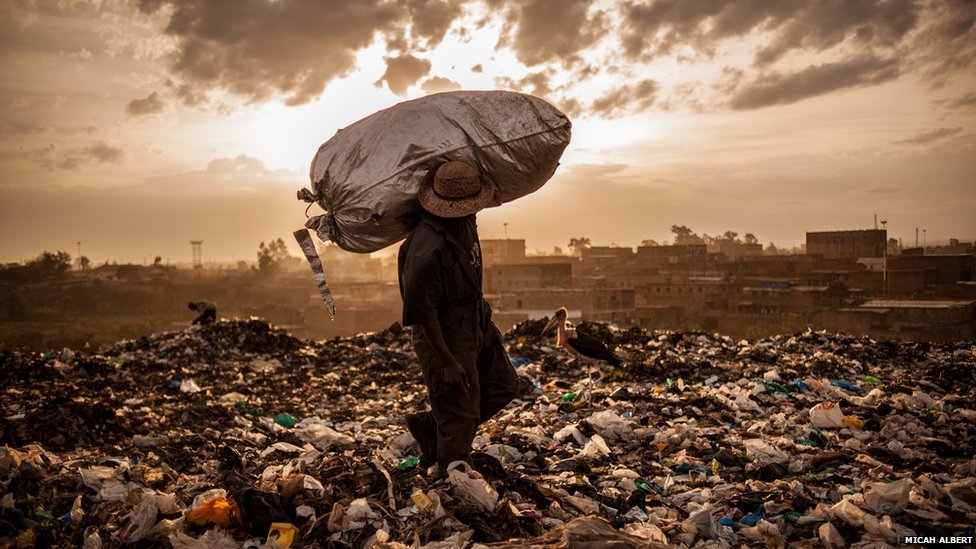 Image by Micah Albert. Kenya, 2012.
Nathalie Applewhite, Managing Director: "I picked this image because it captures a kind of grace and resilience, amidst what is literally a pile of trash. We see so many images of "poor" Africans and I felt like Micah's series was framed through a different lens that represents beauty and light, without ignoring the hardship. It also reminds me of the responses we received from students in LA where we presented the work. I asked them to share what words came to mind when they looked at it and they said: hope, strength, empathy, calm, challenge, power. And then I asked them how they would convince an editor in the US to run a story about a dumpsite in Kenya, and one 9th grade student answered: "ethos, pathos, logos," which still makes me smile and feel inspired by how the work we support really does cut across borders--geographic, social, and cultural, and it's amazing to see students making those connections!" 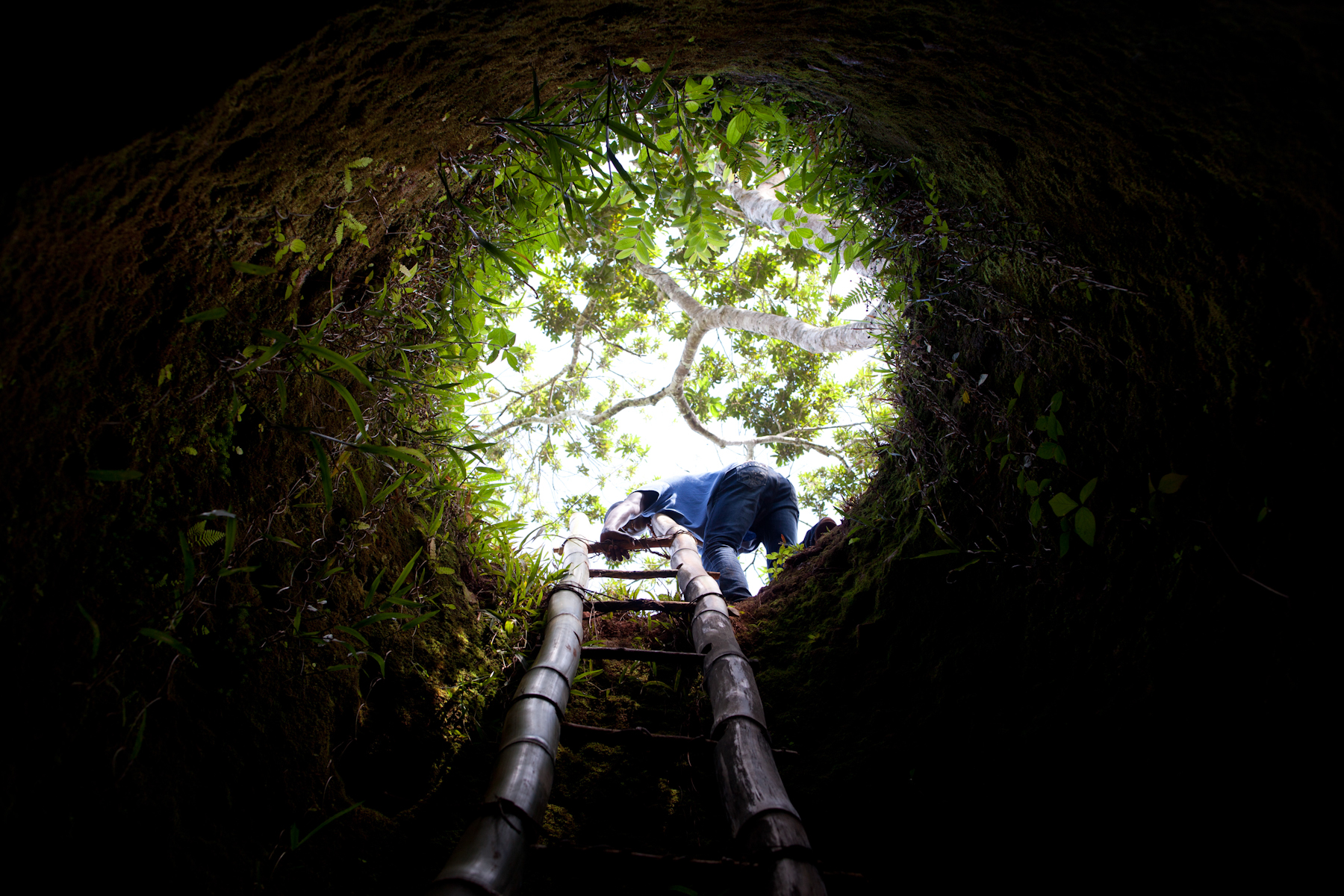 Image by Ben Depp. Haiti, 2012.
Ann Peters, Director of Development and Outreach: "The angle is striking--looking up through the greenery against the bright sky. Perhaps it's the idea of Haiti rising out of the depths of such difficult times and the hope for a brighter future that appeals to me." 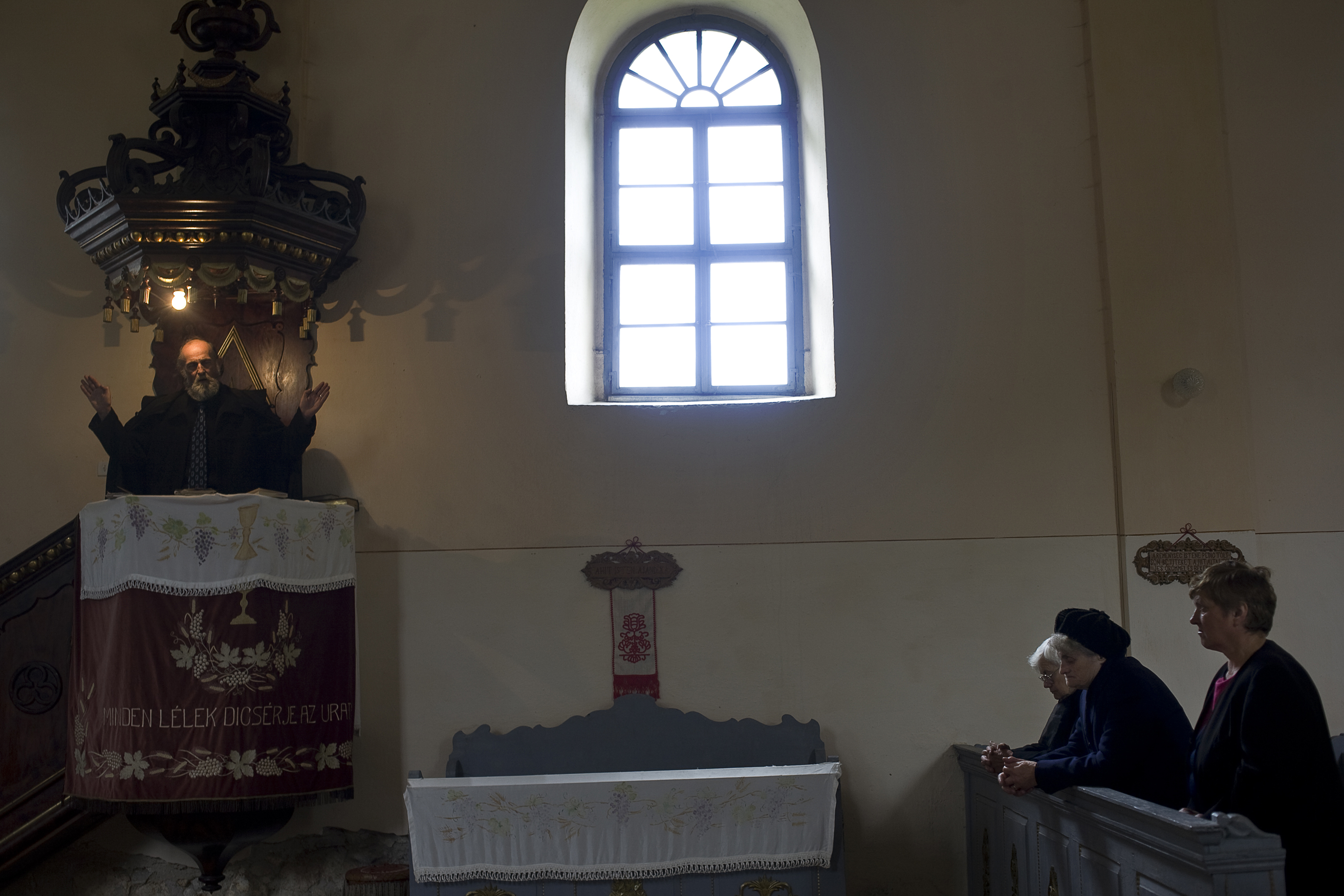 Image by Nadia Shira Cohen. Romania, 2012.
Tom Hundley, Senior Editor: "Mine is Nadia Shira Cohen's picture of the church in Romania. The light bulb shining on the bearded priest's bald head gives the overall effect of a painting by Rembrandt."


Image by Peter DiCampo. Ivory Coast, 2012.
Uliana Bazar, Intern: "This photograph carries the presence of what this man has been through and is experiencing while seeing his home for the first time since it was destroyed during the fighting. It almost looks like he has to hold up the cracked and broken wall with his bare hand. This photo symbolizes displacement and broken lives. At the same time it's composition and colors make this photo look almost painting-like." 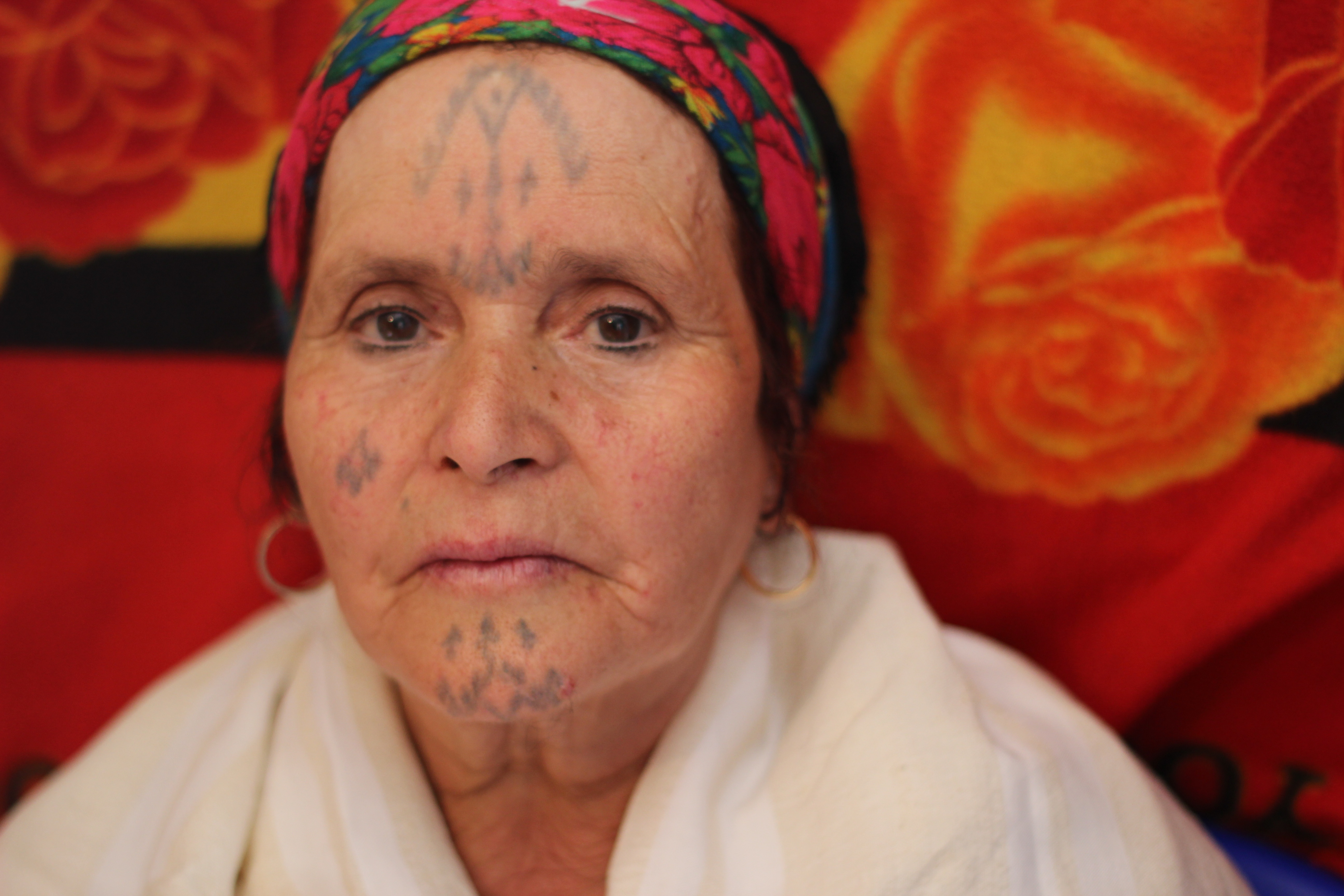 Image by Yasmin Bendaas. Algeria, 2012.
Kem Sawyer, Contributing Editor: "Yasmin Bendaas, a senior at Wake Forest University, shot this picture for "Between the Lines: Facial Tattoos and the Chaouia," her project on the tradition of facial tattoos among elderly women in Algeria--their origin, their meanings, and the reasons for their gradual disappearance. I'm very drawn to this woman's face--she appears to be a warm and wise person. I like the bright colors, the wrinkle lines, and the gold earrings. And I like the idea of preserving forever the memory of something that will soon be lost." 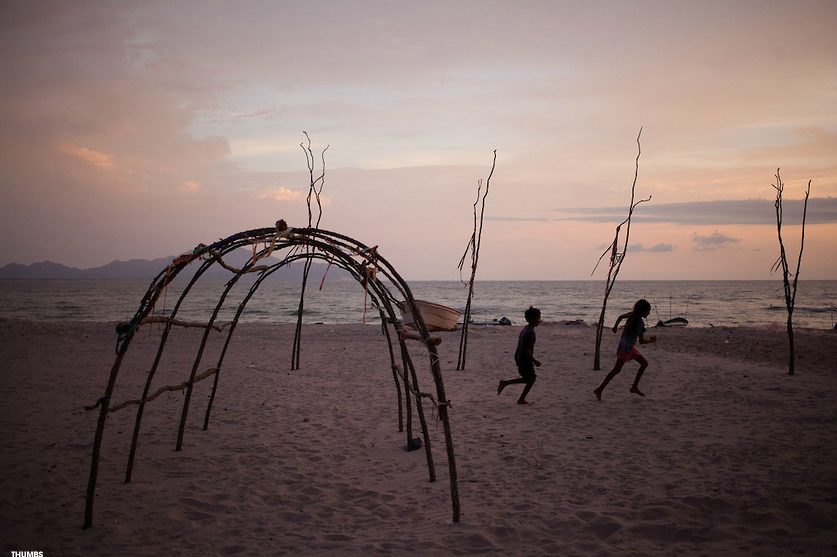 Image by Dominic Bracco II. Mexico, 2012.
Mark Schulte, Education Director: "I love the rosy sky and the beach in this image. The sticks in the sand and the mountains in the background give it a somewhat melancholy other-worldliness, but the playing children make it feel lighthearted as well. And the beach looks just like one I saw last summer in Oaxaca, so the image is familiar and strange at the same time." 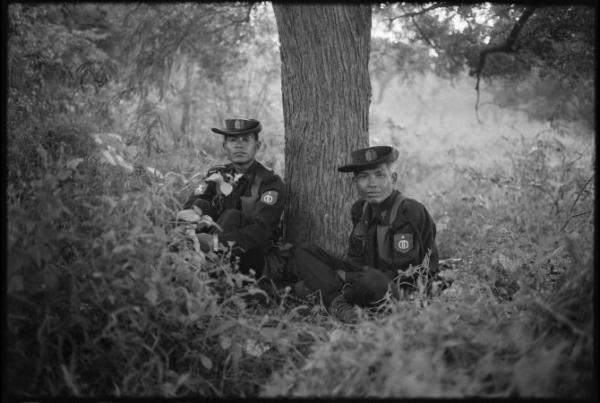 Image by Gary Knight. Burma, 2012.
Caroline D'Angelo, Social Media Editor: ""This photo captures this sense of waiting, a feeling that the world shares while we see what happens in newly-opened Burma. But questions remain: Will it close its doors again, like it has done before? Will the government address human rights violations and ethnic violence? Knight illustrates this by creating a gauzy black and white still, showcasing the guards' folded arms and questioning gazes." Image by Shiho Fukada. Japan, 2012.
Jennifer McDonald, Education Coordinator: "I love Shiho Fukada's project because it brings the shaky foundation of our global economy into sharp focus. In the photograph above, lines of people wait outside a labor center that has been turned into a homeless shelter in Kamagasaki, a neighborhood of Osaka. Though this picture was taken in a city over 6,000 miles away, the same scene plays out in cities across the United States, where despite incredible wealth, entire communities are relegated to the margins to occupy homeless shelters, street corners, detention centers and prisons." 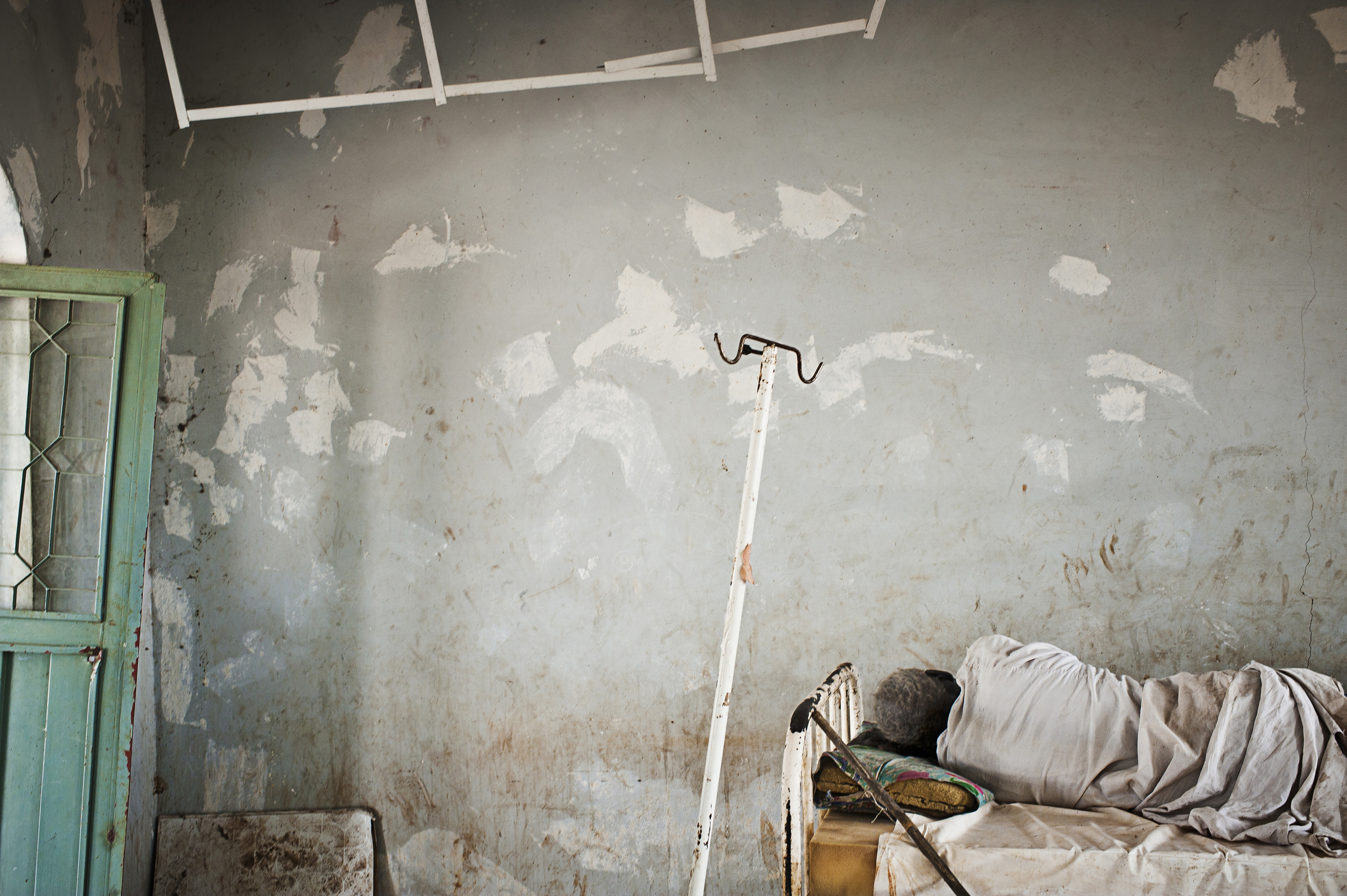 Image by Cedric Gerbehaye. South Sudan, 2012.
Katherine Doyle, Intern: "I was moved by all the photographs taken by Cedric in South Sudan this year but most by that of an elderly man laying in his Paryang Hospital bed in Unity State. His back is turned to the camera and he appears to be sleeping. I find the picture both sad and beautiful."


Image by Sean Gallagher. China, 2012.
Peter Sawyer, Health Projects Director: "Sean's work in the Tibetan Plateau sought in part to document the wonder of the natural world before it is too late--or perhaps in time to save it. The man in the photo reminds me of the joy and energy we find in nature, and so suggests that we cannot live good, healthy lives without a healthy planet." 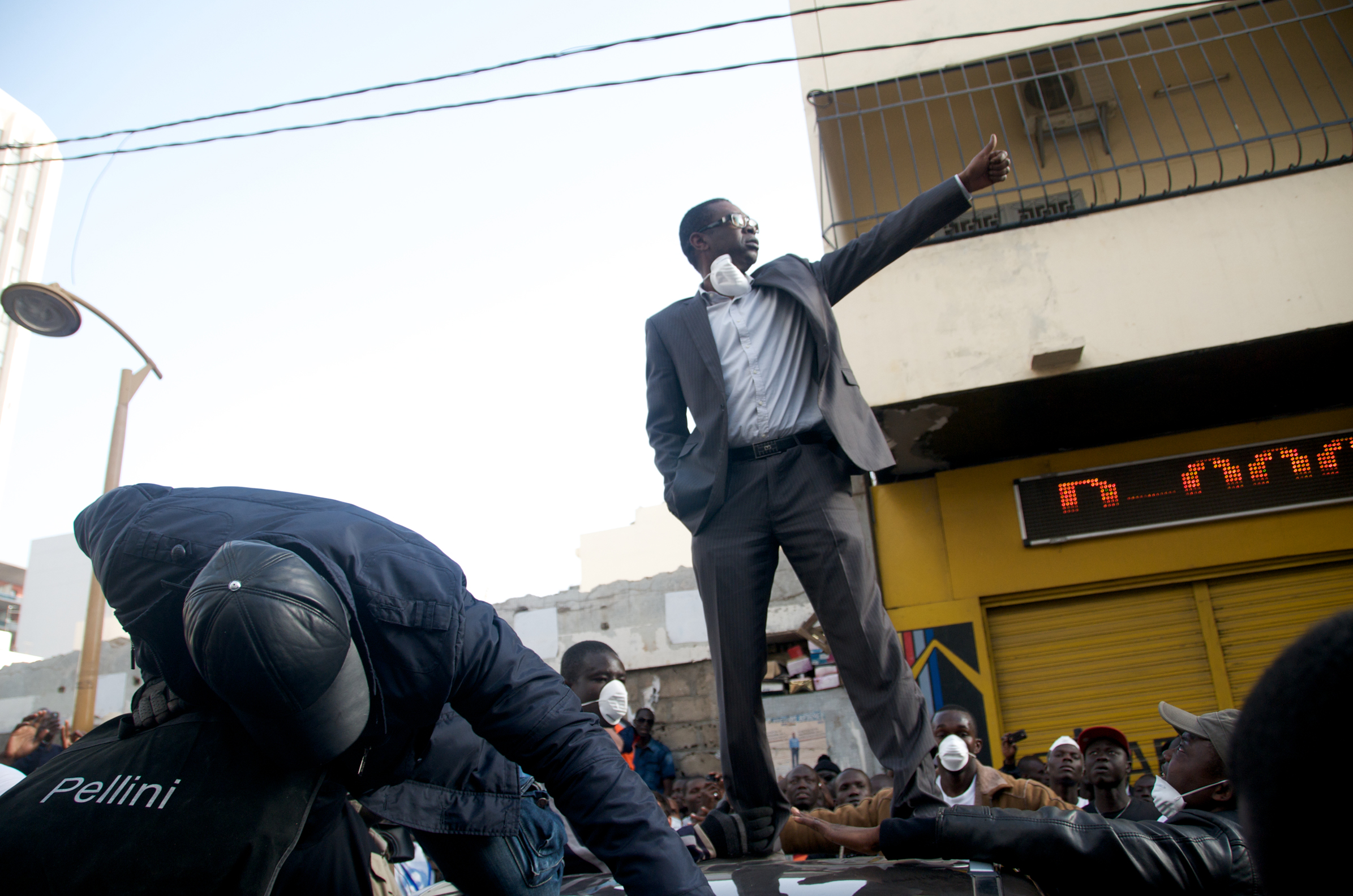 Image by Ricci Shryock. Senegal, 2012.
Dan McCarey, Web Designer: "It's an interesting image because [Youssou N'dour] was prevented from running for president--so he's candidate turned protestor. But he looks presidential in contrast to the chaos around him. (But mainly because I like his music.) " 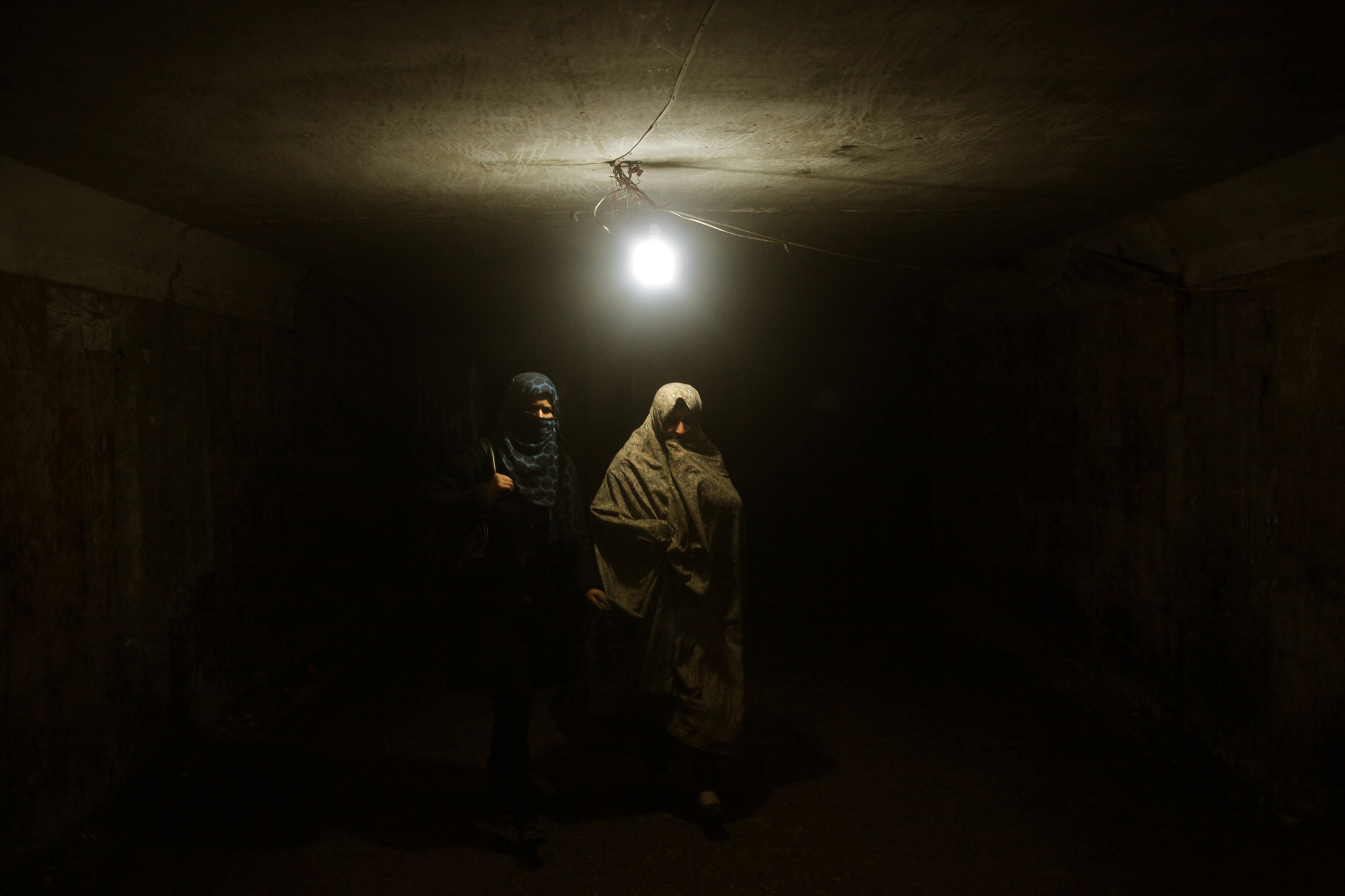 Image by Seamus Murphy. Afghanistan, 2012.
Meghan Dhaliwal, Multimedia Projects Coordinator: "I've long admired Seamus Murphy as a photographer--all of his work from Afghanistan shows a deep connection with the people and the country that many photojournalists strive for but few attain. This particular story, 'Afghanistan: On Love and Suicide,' struck a chord because although the story is innately sad, it is also hopeful. It is a beautiful thing to see women supporting one another and finding an outlet in the art of poetry. This particular photo feels symbolic of the story as a whole--women passing through the shadows, secretive but standing together. I don't know if Murphy intended it to read that way, but to me it is one of the most powerful images in the project."

Tell us about your favorite Pulitzer Center photo below.