The Journey Through Their Eyes

This video is the inspiration of this project. It would be kind of cool to present the project in a similar way to this.

This is another route that people are taking to get into the United States, which is by taking freight trains that run from Mexico to Florida.

This website talks about the routes that people take to go from their country to the Darien Gap. The picture below is in the article and can be used in the project so people can see some routes. 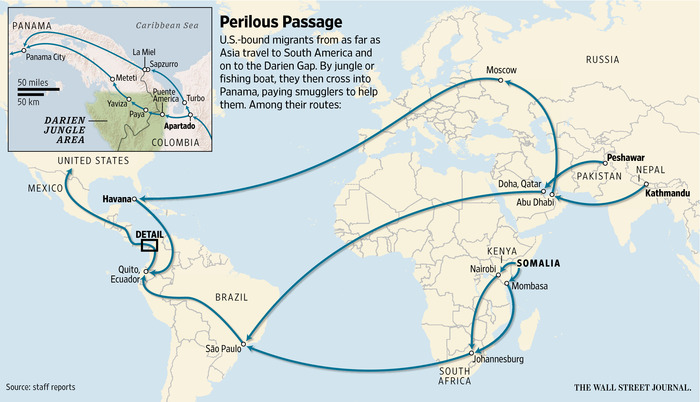 This article details a lot of the issues that people face while trying to travel to the U.S.

This is another article about crossing the U.S.-Mexico border.

This is a personal story of someone who tried to cross the border and the paranoia of getting caught by immigration.

This article shows the hardship people face with pictures that could be used.

Here they are shedding light on the presidential debate and how easily people forget about the human side of immigration. The article shows pictures of items that were found that belonged to people who died while trying to get into the U.S.

The idea of this project is to look at the journey and struggle that immigrants endure to come to the United States through their persepective. I didn't focus on a paticular area that these people are coming from, just their stories. We should emphasize what they had to go through to start a life they believed would be better than theirs at home. I was able to find articles on this issue. However, there is a lot of overlap of what they say the issues are. I believe that is perfectly fine becuase we want to find the commonalities between all of these stories in order to come up with one lesson plan. I also included some of the Pulitzer Center's documentaries and articles that might be helpful. You all can make any changes that you feel are necessary including the title. This is just a template.

REPORTING FEATURED IN THIS LESSON PLAN