May 15 presents a big test for the Lebanese. Whom will they vote for—the bankers and status quo or...

BEIRUT—In a stone-walled living room in southern Lebanon’s Ibl al-Saqi village, newly minted Member of Parliament Elias Jarade brought together two voters for Turkish coffee on his living room couch—one who voted for him, the other against him—to settle a heated dispute over elections they had the day before.

“I was telling them, ‘We’re partners in this country, in this village, again. We’re a big family, and we have to stay together,’” the Harvard University-trained ophthalmologist, who ran independently with the new list Together for Change, said on Monday.

Jarade is now well placed to play the role of intermediary in a deeply divided country. The night before, he had defeated Assaad Hardan in Lebanon’s general elections, winning the Orthodox Christian seat for the South 3 electoral district. Hardan, a member of the Syrian Social Nationalist Party in Lebanon, had held the position for three decades. It was the first time an opposition candidate defeated an ally of the militant Iran-backed Hezbollah party in southern Lebanon, a longtime Hezbollah stronghold.

As a nonprofit journalism organization, we depend on your support to fund more than 170 reporting projects every year on critical global and local issues. Donate any amount today to become a Pulitzer Center Champion and receive exclusive benefits!

Hardan’s loss is part of a larger trend in an election that took many analysts by surprise. Lebanon’s rulers—mainly warlords who came to power after the civil war ended in 1990—have maintained their grip on the country’s politics for decades by relying on followers who remain loyal for sectarian and ideological reasons. In the weeks leading up to the vote, observers feared the status quo would remain in place since independent, nonsectarian opposition parties lacked money and experience. Above all, these candidates lacked unity—several opposition coalitions ran against each other in the same districts. South 3 was the only one of 15 electoral districts with a unified opposition list.

The election marks a small but meaningful shift in Lebanon’s complex political landscape. Hezbollah and its allies have lost their majority in Parliament—securing only 61 seats out of 128, down from 71 in the country’s last elections in 2018. While this loss is unlikely to seriously weaken the party’s military and political power in Lebanon, 14 anti-establishment independent candidates also reached Parliament—13 more than in 2018—showing clear resentment toward the main sectarian parties. As of now, the win is merely symbolic. But later, if the opposition forms a bloc in Parliament, it could swing legislation to enact laws that benefit regular citizens rather than sectarian leaders.

The results reflect the anger ignited in Lebanon’s 2019 mass uprisings, which were triggered by a financial collapse that protesters blamed on corrupt politicians and the country’s sectarian divisions. The largest wound in Lebanon’s collapse was the August 2020 Beirut port blast, the largest nonnuclear explosion in history, which killed more than 215 people and was widely blamed on government negligence. In June 2021, the World Bank described Lebanon as facing one of the world’s worst financial crises, and today, 75 percent of Lebanese live in poverty. For those who protested in 2019, the election results are a silver lining in a country that has known nothing but political deadlock and hardship for the past three and a half years.

Election day was not without its challenges. As in 2018, voting was marred by inadequately trained polling staff, widespread intimidation, electricity issues, and fraud. According to a May 17 report by the European Union’s election observation mission, the elections “were overshadowed by widespread practices of vote buying and clientelism, which distorted the level playing field and seriously affected the voters’ choice.”

The Lebanese Association for Democratic Elections recorded 95 acts of violence in and around polling stations, including physical attacks on journalists. These were mainly documented in the southern districts where Hezbollah and Amal Movement partisans attacked election observers. In the southern village of Ansar, dozens of Hezbollah supporters beat and kicked video journalist Hussein Bassal while he was documenting violations, according to the Committee to Protect Journalists. Additionally, this year, the interior ministry, which suffers from a lack of funds, resorted to sending a 45-minute training video for the 15,000 polling employees instead of training in-person.

The result was inadequate implementation of voting procedures on Sunday, said elections specialist Maroun Sfeir. “You see them not being very comfortable with the procedures,” he said. “That was quite obvious and further impacted the process during the counting.”

Throughout the country, traditional parties tried to maintain a grip on voters by offering them financial bribes, sandwiches, transportation, and other favors—all of which can make a big difference in a country where people must vote where their male ancestors are from, as opposed to where they actually live, forcing millions to perform an election day pilgrimage across the country to cast their ballots.

“With the economic circumstances, many will not vote unless someone will pay for their transportation, which is allowed by the law,” said Nizar Rammal, a Shiite candidate in the South 3 district who lost his race, speaking over the phone last week before the election. He described the process as indirect bribing by the ruling class.

Furthermore, there was widespread abstention, which might have contributed to anti-establishment candidates’ success. While the Lebanese diaspora voted a week early with a turnout of around 60 percent, the country’s residents did not follow suit. Just over 49 percent voted, according to the final interior ministry figures, on par with the 2018 turnout.

In Beirut, a Sunni stronghold, supporters of former Prime Minister Saad Hariri, who stepped down from politics earlier this year, boycotted the vote—the first time in decades the Future Movement, the largest Sunni party, abstained. Instead, they set up bright inflatable pools, where adults and children splashed in the open. Analysts say the major gap allowed the opposition to grab Sunni seats in Beirut and Tripoli, in addition to several other breakthroughs, including Jarade’s win in the south. 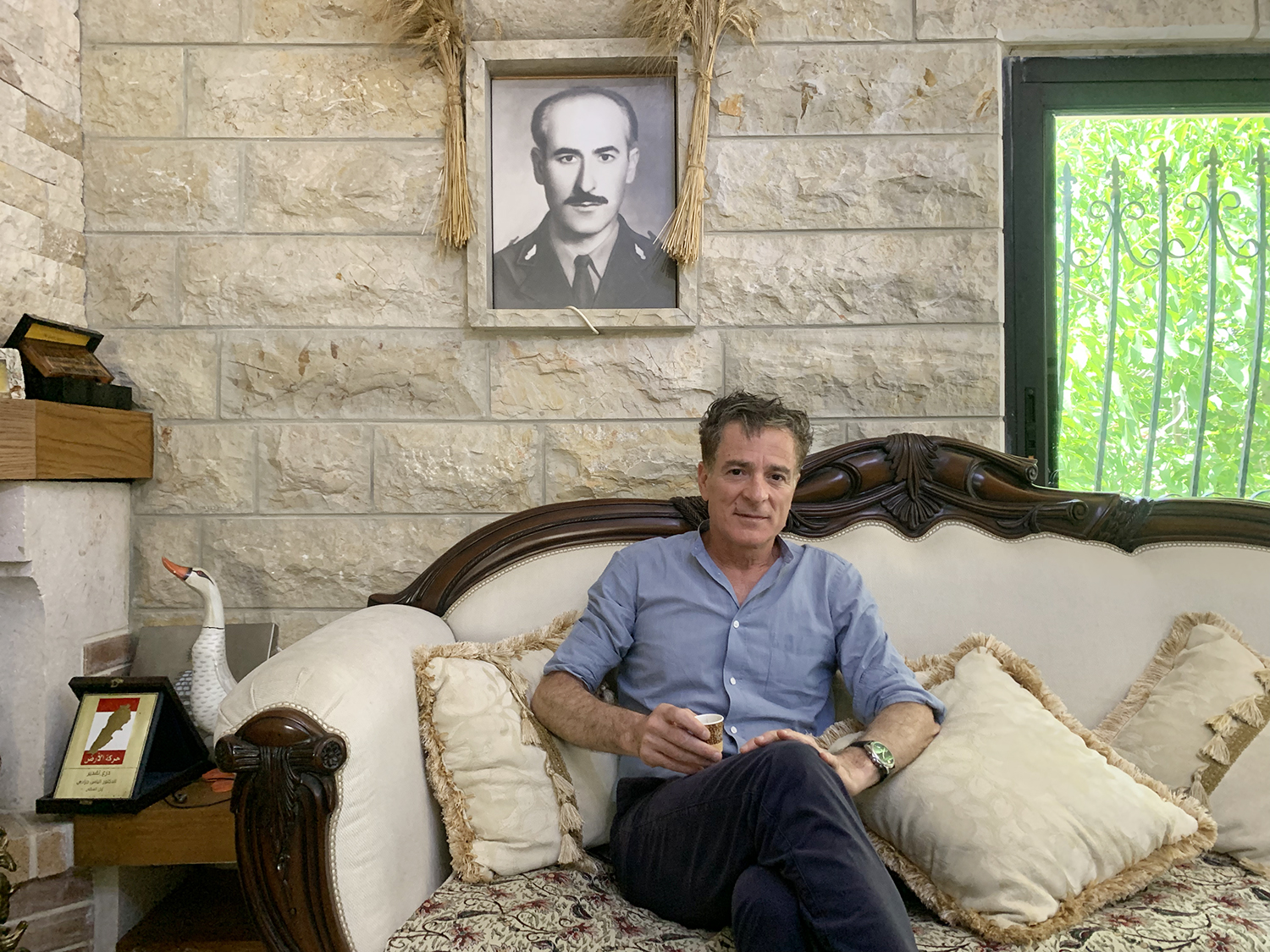 Elias Jarade sits on his living room couch in Ibl al-Saqi, Lebanon, on May 16, hours after his election victory to become a member of the Lebanese Parliament. Image by A.J. Naddaff/Foreign Policy. Lebanon, 2022.

While Jarade spoke about his win, with roosters crowing outside his house and the smell of jasmine wafting from the garden, one of his campaigners ran into the living room, interrupting him mid-sentence to announce a breakthrough: Jarade’s ally on the Together for Change list who was running for the Druze seat, independent lawyer and activist Firas Hamdan, was about to win.

There could not be a more iconic candidate emerging from the 2019 protest movement than Hamdan, who required surgery after being shot in the chest by security forces while on the streets.

“This guy Firas is the true symbol of change. I told him when I started, ‘My target is to get you in,’” Jarade said after hearing the news. “If you look at the political leaders, they are dinosaurs. There is something wrong here.”

The night before, after a long day at the polls, a group of around 200 young people outside Hamdan’s headquarters in the nearby town of Hasbaya blasted revolutionary songs, waved Lebanese national flags—rather than the typical flags of sect-based parties—and chanted slogans, reminiscent of the 2019 uprising. His prospective win, with the live vote count displayed on a screen, was met with resounding celebration by young people opposed to the controversial candidate he was about to defeat: banker and big-game hunter Marwan Kheireddine.

Kheireddine is the chairman of Al-Mawarid Bank, one of the first banks to impose capital controls and restrictions on depositors during the collapse of the Lebanese pound in 2019, making it impossible for Lebanese to withdraw their money while their savings crumbled and the ruling class moved their money abroad.

Traditional Druze parties and the “Shiite duo” of Hezbollah and the Amal Movement had put aside their differences to nominate Kheireddine together. Yet even supporters of those parties criticized the decision. On the back page of the daily Al-Akhbar newspaper, which leans toward Hezbollah, As’ad AbuKhalil wrote in his column on Wednesday that one of the mistakes Hezbollah made was backing such a figure.

At the Coral Sharrouf gas station near an Ottoman citadel in Hasbaya on election night, a group of gas station employees—some of whom had voted against their leader, the most powerful Druze politician, Walid Jumblatt—voiced frustration about the nomination. “Marwan doesn’t know the area,” Mahmoud, who declined to give his surname, complained, referring to the fact that Kheireddine, despite being from the area, spent most of his adult life on business trips outside Lebanon. “In this crisis, he decided to buy food from Beirut for his supporters instead of supporting some of the few local restaurants here.”

Still, despite the hit to the establishment, Hezbollah and its Amal allies retained the 27 seats allocated to the Shiite sect.

“Frankly as a political bloc, we did not lose MPs. There are changes in some forces that are dear to us,” said Amal member Ali Hassan Khalil, Lebanon’s former finance minister who was just reelected as an MP. He won despite facing criticism for running, since he is one of a few politicians charged with intentional killing and negligence that led to the deaths in the port explosion. (He dismisses these charges as biased and part of a foreign agenda.)

On the other hand, Hezbollah and Amal’s main Christian ally, the Free Patriotic Movement, lost several seats. The U.S.- and Saudi-backed Lebanese Forces replaced it as the largest Christian party in Parliament, winning 20 seats, up from 15 in 2018. With more seats now held by Lebanese Forces, Hezbollah’s most vociferous critic, the results indicate a parliament polarized between allies and opponents of Hezbollah.

Analysts say the outcome could lead to deadlock—and even bouts of sectarian violence—as factions hash out a power-sharing deal over top state positions. Last year’s Iraqi elections present a foreboding sign. The country still hasn’t formed a government seven months after the Iran-backed Fatah Alliance, which represents the Shiite paramilitary group known as the Popular Mobilization Forces, lost two-thirds of its parliament.

“There will be even more deadlock than usual over the speaker, prime minister, and president,” said Maya Mikdashi, an anthropologist and a co-editor of Jadaliyya. “We have another period of stagnation and jockeying ahead of us until these positions are filled.”

With Parliament voting on the country’s leadership in October, whether Lebanon will settle on a path toward reform—or continue its descent into an abyss—remains uncertain. Nonetheless, many Lebanese see the elections as a rise of something new in the air, an ever-so-slight crack in the status quo.

This story was made possible with support from the Pulitzer Center on Crisis Reporting.

A Venezuelan in Beirut: 'It's Like Going Through Hell Twice'