With Business Cards to Burma

Terror in the Golden Land

Repressed and mismanaged by a cadre of generals since 1962, Burma erupted last September in the...


My search for truth in Burma began in a sleepy embassy in Vientiane, Laos, where I sat sweating on a patent leather sofa in a crumpled silk shirt and tie, pulling phony business cards from my wallet and lying through my teeth. It was two months after the monk-led anti-government uprisings of last September, and I had already been rejected a tourist visa twice in Hong Kong and Bangkok. I decided to hit the diplomatic backwaters with a different tack.

So one night in Vientiane I printed a couple dozen business cards, which peddled me as the owner of a Colorado-based jewelry business that has never existed. I designed my own executive stationary and drafted a formal letter of intent. In three days, I had the visa; stamped, sealed and shining like a coin from the pages of my passport.

I wanted to answer one question in Burma: how has a group of xenophobic generals survived 46 years of global condemnation, multiple popular uprisings and the persistent bloodletting of a handful of ethnic armies?

I left Burma a month later with a chilling answer. It wasn't the generals' military might that perpetuated their tyranny – it was their mastery of human psychology.

The decoy continued when I hit Rangoon. They say one person in four is a government informer in Burma's commercial capital, and eager young men routinely stopped me in the street, full of questions in perfect English. "Where are you from? What are you doing here? Where are you staying?" I learned to invent alternate histories of my past.

I wasn't alone; all around me the military government was manufacturing its own brand of truth. You could see it in the Orwellian billboards sprinkled around the city, declaring the People's Desire in four concise points. You could feel it in the heart-thumping bass of the elite nightclubs where white shirts under black lights turned the realities of Burma upside down. You could read about it in the government daily, the New Light of Myanmar, quietly referred to by its street name, the New Lies of Myanmar. Banner headlines declared 2008 a time of "Unprecedented Opportunity" and that Burma's "Private Sector is Booming." This in a country where the majority of the population lives on less than a dollar a day, almost half of the national budget is spent on the military and people are drinking rice juice to survive.

Underneath the junta's propaganda and wishful thinking, Burma's truth stood out like a black eye. Beggars young and old plie 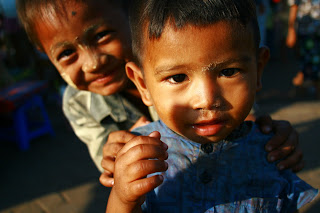 d the streets by day. Prostitutes took their turf by night, all dolled-up and doe-eyed outside the cinemas and under the bypasses, trawling the darkness for a livelihood in a country that has developed its own unique strain of HIV. In Burma, 360 young children die of preventable diseases every day because the government puts only 3 percent of the budget into healthcare. The statistics go on; dark, dense and revealing. But if you're looking to take the pulse of Burma, you only have to sit in a teashop long enough and the truth will find you.

"In Burma, human rights, no," Mr. Nyein told me with all the English he had one afternoon, edging his stool closer to mine though still looking away. "All people like Aung San Suu Kyi," he said of the Nobel Peace Prize-winning democracy leader still under house arrest. He folded his hands at the wrists under the table. "But talking, danger." And then he left.

Another day a teashop owner came to sit at my table, bringing with him a worn copy of Chicken Soup for the Soul. "You like George Bush?" he whispered. I was about to explain that not all Americans support their government when he stopped me. "I love George Bush. He thinks something and he does it. He doesn't like Iraq, so he fights Iraq. I hope George Bush will fight a war with my country."

After several of these teashop monologues, I began to see a Burma at a quiet simmer, in a precarious balance of anger and fear. This was the psychological pillar of the regime's longevity. I was angry enough myself; watching the junta's timber trucks haul old-growth 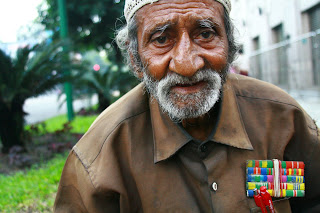 teak to the Rangoon ports every day, listening to stories of taxi drivers suffering under the government's daily fuel-price rigging, seeing the YouTube footage of the wedding of General Than Shwe's daughter; festooned in the jewels of the country her father and his friends have bankrupted through corruption and mismanagement. Who wouldn't be angry? Everything about the last 50 years of this country's history was a moral outrage.

And then, suddenly, one night in the hills of central Burma, as I sat in a bare concrete room seething with eleven plainclothes policemen, I wasn't angry any more. I was scared.

I had heard rumors of a secret military site in the mountains where the Burmese were building something big and dangerous with the help of some foreign advisers. The story was vague, but prevalent, and I wanted to have a look for myself. I found a guide, a jolly man with a pot-belly, and asked him about the idea. He thought about it for the night and met me the next morning with his answer. He would take me.

We hiked for 15 miles in the dust with brief lifts from two GMC jalopies from the 1930s, before we reached the village at the end of the road. Farmers told us about frequent helicopters coming and going from the other side of the mountain. Three months ago, they said, they were awoken by a large explosion that was never explained. A general had warned the village that no one was to venture to the other side of the mountain, and no one was to ask any questions.

For our own safety and theirs, the village put us under friendly house arrest. No one was comfortable saying much, so they lighted on the novelty of me, their first foreign visitor in living memory. Old men gathered that night from surrounding villages to appraise their first specimen of a white man. Bewildered and shy, they considered it a momentous, sober occasion.

"We must have been cousins in a past life," one of them began cautiously, "to have had the good fortune to meet again in this one."

By the morning our presence was clearly making the village uncomfortable – prison sentences come ad hoc and unexplained in Burma, especially where fraternizing with foreigners is concerned – so we started walking back to town.

The police were waiting for us 15 miles later, outside the teashop where I paid my guide and we were going to part ways. They put us on the backs of two motorbikes and took us to the concrete room on the edge of town, empty but for two desks, a picture of General Than Shwe and a sign on the wall that read "All Respect, All Suspect." 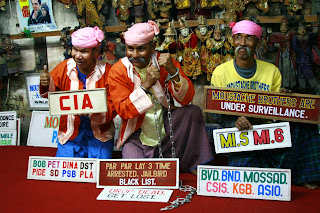 It was the generals' psychological alchemy – resurrecting fear from defiance. My passport was taken, there was much shouting, they found my digital camera, full of a journalist's pictures, and took it to a computer shop to copy its entire contents. I was clammy, dry-mouthed and ready to vomit. Four hours later, when night had fallen, I was released – loaded onto a waiting pickup and deported from the town. The last I saw of my guide was in the rearview mirror: the police had him by the arm, and were leading him into the darkness.

Back in Rangoon I was being followed and my phone conversations were tapped. Random people sat next to me in restaurants, asking questions. I stopped talking to strangers. I started stepping onto moving buses, not knowing where they were going, but knowing, for the moment at least, that I was not being followed. The paranoia was paralyzing. Like Orwell's Thought Police, they only had to do their job once; my own psychology was taking care of the rest.

I flew back to Bangkok a week later, still gripped by cold spasms of dread, worried about who was listening to me, who was watching. It was a small taste of the fear that has stagnated Burma for 46 years of blood-stained military rule. Last September, Burma's volatile scale tipped from fear towards anger, and people who thought they had nothing to lose poured onto the streets in defiance. When the soldiers felled at least 31 monks and civilians and arrested thousands more, fear was restored: the same formaldehyde fear that preserves the generals' power to further deceive, cheat and murder their own people. It's the type of fear that silences you from the inside, until you trust 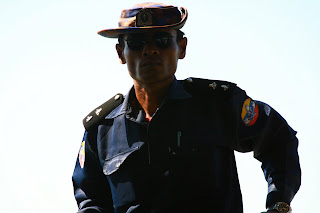 no one, not even your own mind, and decades' worth of your anger and defiance and sense of injustice all turn to jelly within your own heart.

It is giving too much credit to the generals to say they are responsible for all these years of hijacked truth, poverty, silence and isolation in Burma. It's fear that's done all that. The generals just hold the guns.

"You can shout freedom all you want," one young man summed it up in a whisper over a teashop table, "But not when they're shooting at you."