No Viable Offspring, But Many Chance Encounters 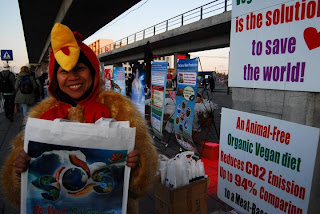 The Korean vegetarians were a lighthearted group welcoming delegates to the convention, but in the heavy handed police tactics later in the week they all but disappeared.

The back-chatter from pundits and agents provocateurs has not diminished. I hate being right when I am pessimistic, but there was never a feeling that a deal was imminent in Copenhagen. After reading through the drafts that were created at the conference, there is no deal, on anything.

I am happy to invite all readers to look through the draft documents put forward by the working groups and the language of the "agreement." They can all be found on the UNFCCC webpage.

If anything good can be said of the talks and and event, it is that politicians seem to be taking the issue seriously, even if they cannot seem to agree on virtually anything.

If you would like a recap, its best to go read Andrew Revkin's and the rest of the New York Times' coverage of the event. After looking through many sites and newspapers I think the NYT really did great work and should be applauded for taking this conference very seriously and working hard to make the chaos somehow understandable.

There was another piece of outstanding reporting that must be mentioned. In the midst of the beginning of the high-level talks on Wednesday, the London-based Timesonline (by the Times of London newspaper) put out a story within hours of it happening which is a triumph for on-the-ground reporting. I was there and think the reporter did an excellent job of making the "fog of war" a little easier to see through.

The real success of what happened in Copenhagen may be that the dialogue is now open, but for many of us working on the front line of this topic, that dialogue is far from enough. Forests are being wiped out as I write this, carbon dioxide and greenhouse gases are spewed out into the air, and the summer thaw in Antarctica is eroding the ice-dams that keep the Antarctic's glaciers from dumping their ice into the sea. "Blah Blah Blah...Act Now!" was a constant poster favorite among protesters in Copenhagen. But at least the dialogue is on.

A part loser was the much hoped-for deal on Reducing Emissions from Deforestation and forest Degradation (REDD) in the third world. Going into the talks, realists knew this was the only real chance of a concrete deal, but even that was not to be. Because at the end of the conference the actual deal was not ratified by the member countries, the hard work put into the REDD component could not be made into law, even though the majority of nations supported it and it was not the subject of intense disagreement. It was, rather, a victim of political football. That does not mean REDD is dead, only that it's inclusion will have come at a later date, when a deal is actually signed, hopefully in Mexico City. An excellent break-down of REDD by Steve Zwick is available here.

Things that did not go wrong:

The Kyoto Protocol
There has been much talk from the media about the fact that this was the time when a new Kyoto Protocol had to be put into place because the current system expires in 2012. That is not true. I spoke directly to Yvo De Boer, the head of the UNFCCC, and he reiterated that until another legally binding treaty is in place, the Kyoto Protocol stands, before and after 2012. So in some ways it is better to have the current system than a watered down version, which was a fear.

American Cap and Trade
The Senate legislation, stalled at the end of 2009 in the USA, still has a good chance of passing. That is because the talks in Copenhagen, though they did not end in a legally binding treaty, did emphasize (in relatively strong language) the need for member countries to put their own legislation in place. It was a known that the US could not take a leading role in the Copenhagen talks until that legislation was passed, since the administration's hands were tied both politically and financially until it was. So with the growing national and international debate on climate, and the success this week of the Democrat-led legislation on health care, it is much more likely that the American Cap and Trade legislation will pass in 2010, paving the way for a more robust, US driven carbon market.

Healthy Protest
Despite or maybe because of the heavy-handed tactics used by the police in Copenhagen, the necessity for healthy protest has never been more obvious. People around the world need to shout from the streets, from the press, from the rooftops that they will not stand for more talk, but that they want action. They need to protest with their ballot papers, in the words of one campaigner: "If these turkeys we elected will not do what we want, they will be replaced by representatives who will". Politicians around the world should take note of that. People are angry, people are ready for a decisive move that puts us on a low-carbon future.

Brazil
In talks and in behavior the Brazilians came out on top. They mediated an important talk on Friday with both Clinton and Obama that is credited with saving the language of the final agreement. They have changed their behavior from the 1980s on so many issues, and though it is not well known, it was Brazilians who put forward the strongest language in the Kyoto Protocol itself. They have consistently led from the front on deforestation issues, and many of their most vocal campaigners from civil society have taken on posts in the government where they have succeeded in using their voices to change a system of land-use and development which the world should learn from.

Marina Silva, an activist who became the Environmental Minister of Brazil, addressed a group at the conference. "We must all keep up the pressure for a progressive deal on the environment. The activists must keeping fighting, the people of the earth must keep up the pressure. We will win, because we will not quit." 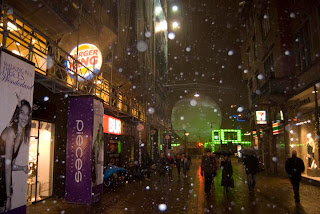 The globe in the center of Copenhagen, where a storm of climate controversy raged.

This story was reported for the Pulitzer Center on Crisis Reporting as part of the Copenhagen News Collaborative, a cooperative project of several independent news organizations. Check out the feed here from Mother Jones.

Grantee
Jeffrey Barbee was born in the mountains of Colorado and brought up in the African country of Malawi and works as a photojournalist out of his studio in Johannesburg, South Africa. Starting his...